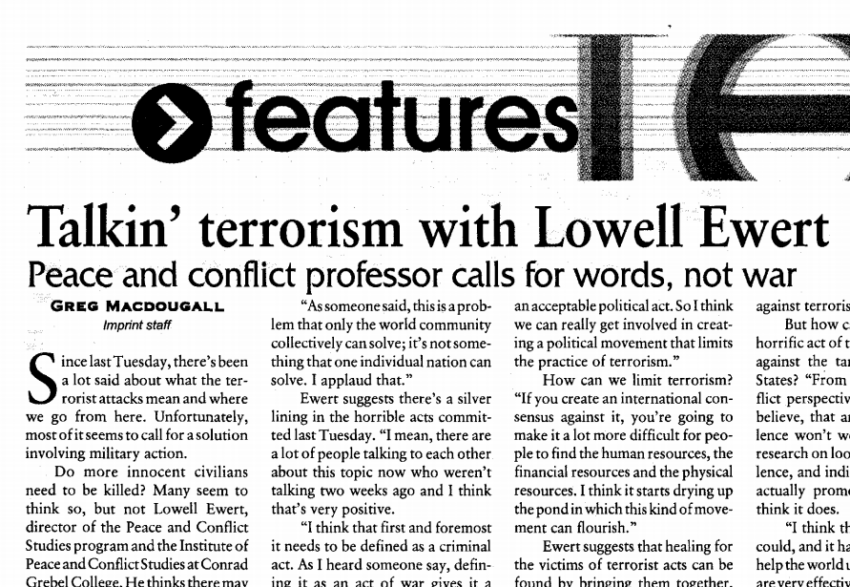 Since last Tuesday, there’s been a lot said about what the terrorist attacks mean and where we go from here. Unfortunately, most of it seems to call for a solution involving military action.

As the American government declares war on terrorism, Ewert sees “the need for the world community to come together and define this thing called terrorism and agree that its wrong.” But, that’s easier said than done: “I think that’s going to be a more difficult process than George Bush or anyone else thinks at this time because I don’t think there’s a real agreement on what terrorism is.

“As someone said, this is a problem that only the world community collectively can solve; it’s not something that one individual nation can solve. I applaud that.”

Ewert suggests there’s a silver lining in the horrible acts committed last Tuesday. “I mean, there are a lot of people talking to each other about this topic now who weren’t talking two weeks ago and I think that’s very positive.

“I think that first and foremost it needs to be defined as a criminal act. As I heard someone say, defining it as an act of war gives it a certain legitimacy that it doesn’t deserve. It’s a criminal act and it should be treated in that way.”

Ewert sees value in looking “to listen to victims’ groups about how they define it, to listen to government officials, to listen to those who are involved in trying to prevent it, to really consult widely.

“To push the learning, the knowledge, the debate and dialogue on that issue is important,” he says.

“I think that civil society can play a very important role in defining terrorism and clarifying for world political leaders that it is not an acceptable political act. So I think we can really get involved in creating a political movement that limits the practice of terrorism.”

How can we limit terrorism? “If you create an international consensus against it, you’re going to make it a lot more difficult for people to find the human resources, the financial resources and the physical resources. I think it starts drying up the pond in which this kind of movement can flourish.”

Ewert suggests that healing for the victims of terrorist acts can be found by bringing them together. “You look at groups of victims who have been subjected to some horrible reprisals internationally — Latin America and other places in the world where there have been a whole bunch of civilian victims — to get them talking to each other and with the people in New York, to talk about their common humanity, their common anger at being victimized and their common fear at being targeted. I think building those kinds of connections between victim groups around the world would be a very valuable part of both healing and solidifying world opinion against terrorism.”

But how can we deal with this horrific act of terrorism committed against the targets in the United States? “From the peace and conflict perspective we believe, and I believe, that another cycle of violence won’t work. I think further research on looking at whether violence, and indiscriminate violence, actually promotes peace. I don’t think it does.

“I think the peace community could, and it hasn’t yet, but it could help the world understand that there are very effective ways non-violently to respond to these horrendous acts, and that blind military striking out may not be the answer.

“Some of the rhetoric seems to say that a military response alone is going to be the solution. Violence typically doesn’t work. Violence typically creates the fertile ground for very, very angry and bitter people to come along and commit other acts. I’m a little concerned that the talk of revenge and retaliation will, if history is a guide here, create more people who have an axe to grind with one or more of the parties and it will not result in a peaceful and just solution for all. So that kind of revenge and retaliatory language is something that I think is misguided.

“There’s been some pretty scary articles that I’ve read basically saying ‘strike back and if a lot of civilians are killed that’s too bad; it’s regrettable but it’s okay.’ That kind of thinking really is frightening to me because it assumes that violence will work.