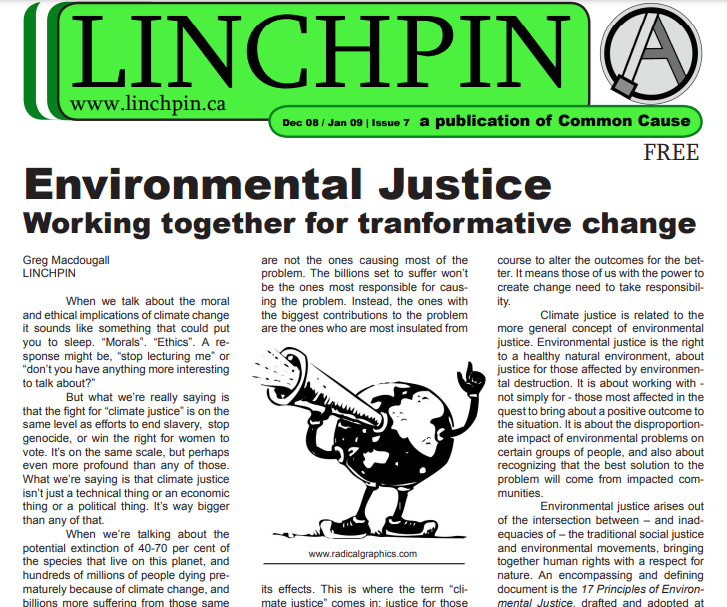 Environmental Justice: working together for transformative change
by Greg Macdougall
Dec 28, 2008 – published in the Deceember’08 / January’09 Linchpin newspaper (pages 1 and 2 of PDF)

When we talk about the moral and ethical implications of climate change it sounds like something that could put you to sleep. “Morals”. “Ethics”. A response might be, “stop lecturing me” or “don’t you have anything more interesting to talk about?”

But what we’re really saying is that the fight for “climate justice” is on the same level as efforts to end slavery, stop genocide, or win the right for women to vote. It’s on the same scale, but perhaps even more profound than any of those. What we’re saying is that climate justice isn’t just a technical thing or an economic thing or a political thing. It’s way bigger than any of that.

When we’re talking about the potential extinction of 40-70 per cent of the species that live on this planet, and hundreds of millions of people dying prematurely because of climate change, and billions more suffering from those same changes, you might figure out that moral and ethical considerations are actually vitally important things to think about, to talk about and, most importantly, to act on.

You might realize how important it is to get people to have a 40-years-from-now vantage point, one that allows us to fully grasp the magnitude of what is potentially going to happen if we don’t change course. If we truly let sink in what we’re facing we realize how important it is to do our utmost, beyond any political, economic or technical limits.

One thing to recognize is that animals, who are potentially going to be extinct, are not the perpetrators of the damage to the environment. The hundreds of millions who will die prematurely are not the ones causing most of the problem. The billions set to suffer won’t be the ones most responsible for causing the problem. Instead, the ones with the biggest contributions to the problem are the ones who are most insulated from its effects. This is where the term “climate justice” comes in: justice for those who are going to suffer, or die, because of their relationship to a catastrophically changing climate.

Justice would mean that the people, the governments, the industries causing the problem would take responsibility for their actions and the consequences, and dramatically change course to alter the outcomes for the better. It means those of us with the power to create change need to take responsibility.

Environmental justice arises out of the intersection between – and inadequacies of – the traditional social justice and environmental movements, bringing together human rights with a respect for nature. An encompassing and defining document is the 17 Principles of Environmental Justice, drafted and adopted at the People of Color Environmental Leadership Summit held in 1991 in Washington, D.C.

Solidarity work in the context of environmental justice comes in the form of ally groups taking their resources and support and directing them to where the affected communities/groups would like them. It is also about allowing those communities – primarily women, people of colour and/or the economically disadvantaged – to speak for themselves on the issues that matter to them.

There is both a need and opportunity for coalitions to come together to address many of the interrelated problems we face: those to do with the environment, poverty, racism, and colonialism. But in any situation where different groups join to work together, there is a responsibility to address the power dynamics that exist and that will otherwise unhinge and undermine the potential of the coalition work to bring about transformative results.

Race, gender and class are three of the primary power dynamics that need to be addressed to successfully deal with the complex issues facing us. There is a need to change how we talk about these power dynamics, to recognize how they marginalize some to the benefit/privilege of others, and to deconstruct them so as to harness our true power to create change.

We need to change things and change them structurally, not just on a personal level. We are running up against the limits of our infinite growth model of economic and societal development. There is a burgeoning “decroissance” (degrowth) movement that is working on the transformation to a deindustrial society, working to completely change the way we look at society and at the world.

The earth has a limited carrying capacity, and we are in danger of surpassing that limit. We need to change course. This involves things like “steady state economics” and a new version of the 3 Rs: Renouncing the industrial model; Redesigning our societal and cultural paradigms; Rebuilding our society. One part of this “degrowth” is the need to reduce greenhouse gas emissions by some 90 per cent. It will be a shift from fossil fuels to decentralized, renewable energy.

We have a choice about the type of world we want to live in, and “we” can refer to any or all of our world, our nation, our province, our city, our group, our neighbourhood. On all these levels, we will be choosing between transformative change or business as usual, with business as usual almost certainly leading to devastating effects.

We now stand at a point where the movements for climate justice, for environmental justice, need people to really get things going in the right direction, bringing all the key aspects together as we move forward. We can be those people. We need to be.

This article is a combination of the ideas on environmental justice presented by Anjali Helferty, Clayton Thomas-Muller, Graham Saul, Ben Powless, and Bob Thomson at the Organizing For Justice conference held Nov 20-22, 2008 in Ottawa. For further reading see Andil Gosine and Cheryl Teelucksingh, Environmental Justice and Racism in Canada (Emond Montgomery Publications, 2008).