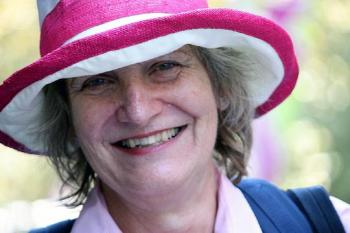 Raewyn Connell, an Australian academic who specializes in social constructions of masculinity, brought her wealth of knowledge to Canada to talk about the state of gender equity.

— (video interview embedded at the bottom of this article, or on youtube here) —

As one of four speakers on the “Breaking Barriers” plenary at last month’s Women’s Worlds 2011 conference in Ottawa, Connell said the session covered a wide range: “things like gender education, personal stories, what’s happening in the world, what’s the position of Muslim women for instance in relation to feminism, how the Arab Spring is changing people’s perceptions of what can happen in the world and women’s role in that was one of the highlights, questions of violence… It’s a somewhat scary experience [laughs] you’re sitting up there on a brightly lit stage, with a thousand or more people in the room.” See plenary video here.

Connell, who holds a University Chair at the University of Sydney, described her work the following day in an interview.

She made it clear this work goes beyond individual efforts: “I’m part of research teams, out of which this has come… It’s to a large extent about the debates that go on in the field, the research techniques that are available, and the rethinking that I might have done of these, that inform my research.”

On a personal level, however, she has a long involvement with gender equity issues, alongside her work with gay men on community education around HIV/AIDS and, having “grappled with gender issues in my personal life as a transsexual woman,” it drove an interest in the field and “maybe a little bit has helped me to become aware of the contradictions and complexity in gender, which is good for research of course.”

“When you’re looking at masculinities, you’re not only looking at an individual personality or character, you’re also looking at football teams, corporations, armies, governments, and so forth, all of which are involved in constructing gender,” she said.

She talked about how strong this influence is.

“That’s often where you get the relationship with sexuality, because very often — it’s not universal, but very often — the hegemonic, the most honoured, the powerful version of masculinity is heterosexual, whereas disavowed / rejected forms of masculinity are often associated, rightly or wrongly, with being gay.”

She noted that often young boys learn to apply terms such as “fag” or “poofter” in a derogatory way long before they actually learn the sexual meaning of the words.

“So you get social and cultural hierarchies of masculinity, and that’s quite an important fact about the way the gender system, and the gender order as a whole, works.”

In the context of talking about historical and shifting patterns of masculinities, she observed that “a violent and dominating form of masculinity [can] become dominant in the society and that can be very damaging and dangerous for other people.”

Connell said some girls and women learn and engage in patterns of masculinity, but that it is mainly boys and men who do so. She also talks about femininities, noting that there is not as much research done overall on their constructions (although a fair bit is done on models of femininity in the mass media) — adding “you don’t find the same patterns of femininity as you do of masculinity, because the overall position of men and women in the gender order is different, that’s what feminism is about, because of the massive economic and political inequalities.”

This, she said, invited greater flexibility and coping strategies on the part of women.

She talks about the different ways (“interventions”) being used to change patterns of masculinity to sustain more equal, less violent relationships with women.

“There’s a lot of work that goes on about this, it doesn’t attract much public attention usually, but there’s work in the schools, there’s work in development agencies, there are community programs around such things as violence prevention, that’s one of the major areas of action, that are trying to change entrenched patterns, for instance domestic violence.”

And she also credited the feminist community.

“Of course, a lot of feminist activity is trying to change patterns of interactions between men and women with the implied consequence that this may also change patterns of masculinity among men, as men and boys come to learn more democratic and respectful and equal ways of behaving towards women.”

I asked her what actually works in changing these patterns. “That’s very situational. What might work in a white suburb in Canada might not work in one of the cities of violence against women in Mexico, and what works or doesn’t work there may or may not work in India. So I’m reluctant to say there’s a one size fits all solution.”

But there were commonalities, Connell said.

“Broadly, involving men in developing their own strategies for change is really important,” and not only telling or ordering them to change. “Men themselves have to be engaged, boys have to be engaged in the process of changing gender relations. Often men will find it very interesting to do this, boys in schools want to learn about gender — it matters to them, it’s important in their lives — so that kind of community education process I have a reasonable amount of faith in.”

She also noted the need to work with and about institutions, specifically those like the military, police and prison system, where a lot of gender-based violence comes from — or in cases of post-conflict/ rebuilding societies, to actually be designing the institutions from the ground up — to be gender inclusive, peaceable and respectful.

In terms of the required motivation or interest to engage in changing patterns, Connell called it an incremental process.

“We’re dealing with a system of privilege and exclusion, and the people who benefit from that system are extremely unlikely to engage immediately in a large program of change… Even in fairly hierarchical and violent institutions, some people can see that the long-term survival or welfare of the system depends on something changing. To give another example, parents often want good gender education in the schools, because they know that the world their kids will be living in is different than the world they grew up in, and they want the best for their kid, not necessarily a reproduction of what they got from their parents.”

There are different patterns of masculinity, Connell said, “And that tells you from the start that there will be different responses to any proposals for change.”

In terms of where we are now, she believed many countries have experienced an intergenerational shift in the last generation towards attitudes that favour more equality between men and women.

“But there are also situations in the world where things have gone very badly wrong for women,” she said, citing the new patriarchy being constructed in Russia, and horrendous amount of gender-based violence in parts of Mexico near the U.S. border.

“Things can go wrong as well as things can go right, so that’s what makes the politics of gender both difficult and urgent.”

This article was originally published on rabble.ca

About the author: Greg Macdougall is an educator, organizer and writer based in Ottawa. More of his writings and other good stuff can be found at his website, EquitableEducation.ca