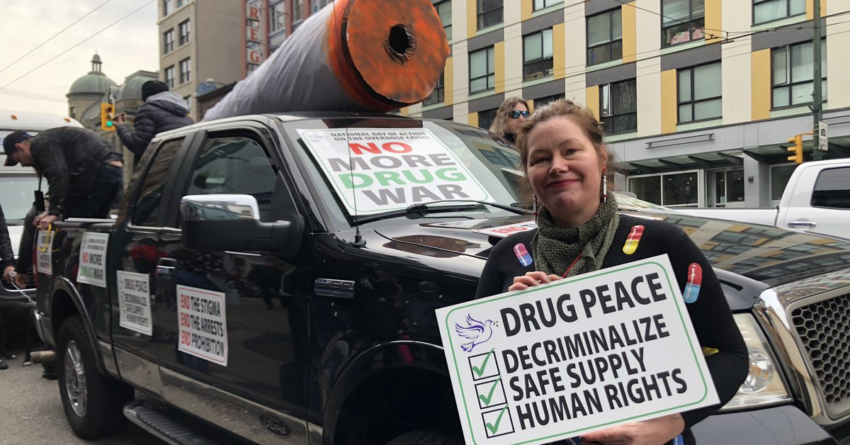 Sarah Blyth, executive director of the Vancouver Overdose Prevention Society, explains what’s needed to address the rising epidemic of overdose deaths: safe supply of drugs, decriminalization, a better approach to mental health – which is to say, action from all levels of government.

She also discusses the experience of working in the heart of the crisis, the trauma, the stories from family members of victims, the advocacy work, the drugs involved, and more.

This interview was recorded when Sarah was in Ottawa, December 2018.

She was here to testify at the Parliamentary Standing Committee on Health, about the impacts of methamphetamine abuse in Canada. The audio of her presentation from the committee is embedded here (or mp3 file link) and there’s the transcript/audio of the full hearing with other witnesses and Q&A.

The PSA (Public Service Announcement) video, for the April 16 National Day of Action on the Overdose Crisis, is viewable below. A transcript follows.

The video is also posted on Youtube, Facebook, and Twitter, and can be downloaded via archive.org for reposting. See coordinating organization capud.ca for more on the National Day of Action.

CAPTIONS/TRANSCRIPT OF PSA (segments from full interview with Sarah Blyth):

“As you use opiates you need more and more over time

When you’re getting it from the street, you just don’t know what you’re taking

Probably in about 2015 it seemed to be like, “Why are all the…”, you know what I mean like, “There’s more people dying than usual…” you know, you just couldn’t put your finger on it completely but there was just, there was kind of like a slow uptake of overdose deaths and then it was all of a sudden just everywhere

So it’s pretty traumatizing, so many people have been lost that you can barely get over, you know, the last person or the last even five people and you’ve got someone else dying that you have met and known for a long time or whatever and it’s just like, it’s so difficult to even have like, other people comprehend how it is, it’s terrible

I’m not really sure at this point why any level of government would be hesitant to really take on the crisis because I think people are ready for the government to take it on, like to do something serious about it

So I think, I think the government, it just doesn’t know what to do, because it’s not the health crisis that they ever expected. You’d expect all kinds of different things to to be a health crisis but this isn’t what you would think of

I don’t know how many more people have to die including young people there’s different stories but mostly it’s “I never believed that this could possibly happen to my family, and my child, or my family member”

There’s an organizations of mothers that have had children that have died and they haven’t… It just seems like nobody’s having an impact enough. All of the people that are asking to do something about it, the most heartbreaking stories haven’t been enough to make it a priority

They [governments] are not treating it as one, a real emergency.”