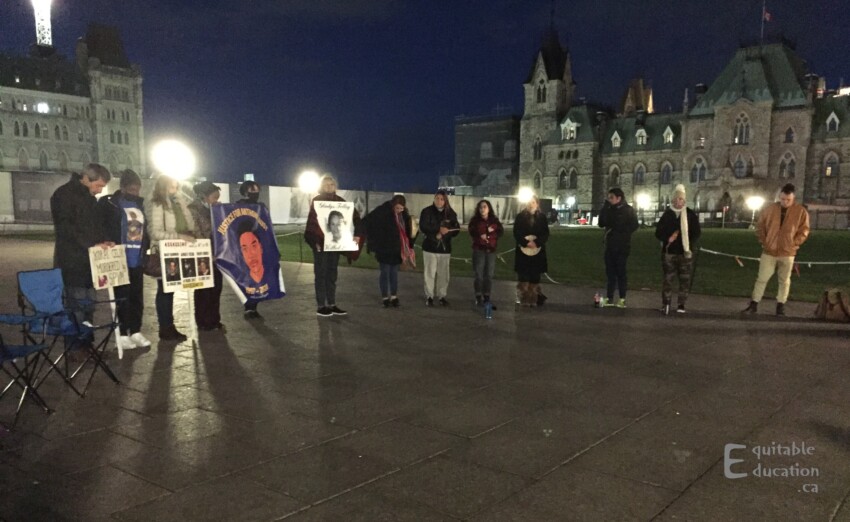 A short-notice Vigil for Victims of Police Killings was organized by Bridget Tolley / Families of Sisters in Spirit (FSIS) , for Ottawa at Parliament Hill on October 22, 2021, in parallel with the annual (since 2010) Montreal Justice for Victims of Police Killings event, and the USA National Day of Protest (since 1996) organized by the October 22 Coalition to Stop Police Brutality, Repression and the Criminalization of a Generation.

Family members of Anthony Aust (killed last October during a ‘no-knock’ raid by the Ottawa Police) and Koray Celik (killed in March 2017 by Montreal Police after his parents phoned 911 to get him help) spoke at the event along with Tolley, whose mother Gladys Tolley was killed when hit by a Kitigan Zibi Police car 20 years ago, in October 2001. Members of Assembly for Seven Generations accompanied with song.

The following audio is not top-quality technically, but it is at least audible – thus, provided here for anyone who wasn’t able to attend and is interested in hearing what was said. If anyone would like to help with transcribing, or with improving the audio technical quality, please contact me.


Bridget Tolley (only a partial segment of the speech):

Bridget Tolley, as MC wrapping up the event