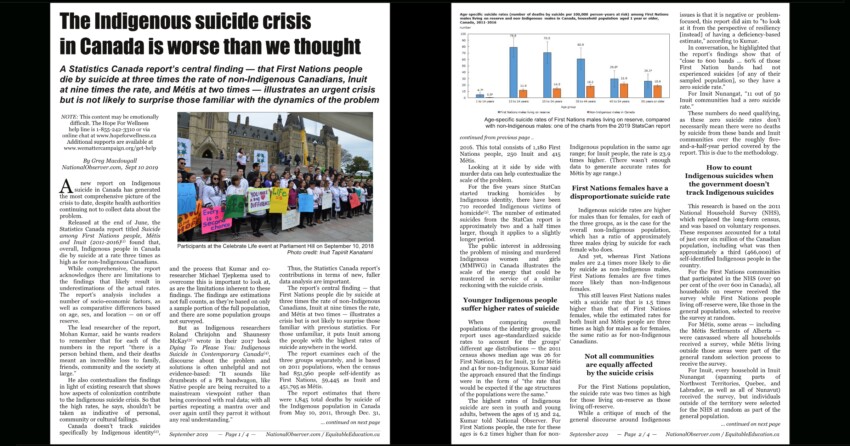 “Canada’s Indigenous suicide crisis is worse that we thought“

The article is also published in PDF versions to print for off-line reading, use as handouts, etc:

A new report on Indigenous suicide in Canada has generated the most comprehensive picture of the crisis to date, despite health authorities continuing not to collect data about the problem.

Released at the end of June, the Statistics Canada report titled Suicide among First Nations people, Métis and Inuit (2011-2016) found that, overall, Indigenous people in Canada die by suicide at a rate three times as high as for non-Indigenous Canadians.

While comprehensive, the report acknowledges there are limitations to the findings that likely result in underestimations of the actual rates. The report’s analysis includes a number of socio-economic factors, as well as comparative differences based on age, sex, and location — on or off reserve.

I had featured the work and perspectives of Dr. Chrisjohn along with his co-author, Shaunessy McKay (contact info in the video, for any followup interest), linking Indigenous suicide to alienation, oppresson, capitalism, and colonialism, in an article I wrote last year for Richochet:

“Indigenous people fighting to live through community and activism“

This was re-published at CounterPunch, “Indigenous suicide in Canada.”

There also is again a  PDF version (four 8.5″x11″ pages) for printing,
along with a selection of accompanying multi-media resources with the full hour-long video that the above segment is from, a 1.5-hour audio presentation on their book, and additional content including from the We Matter organization’s Hope Forum national Indigenous youth gathering in early 2018.