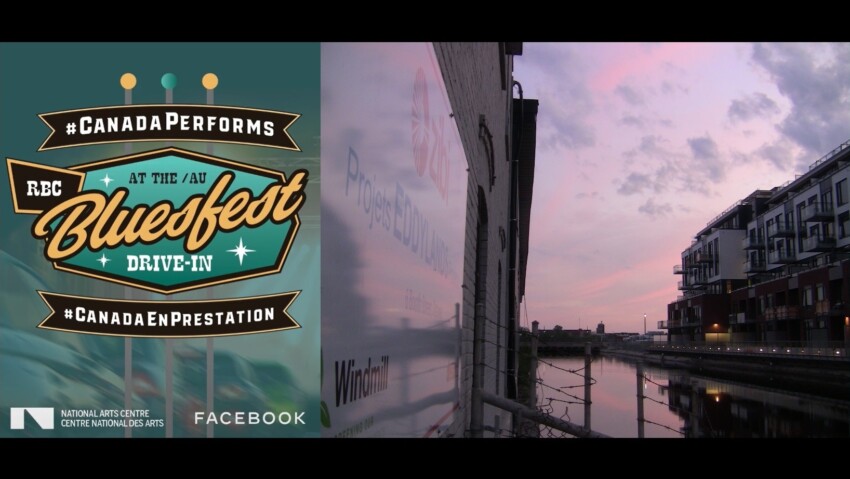 These first two August weekends, the RBC Bluesfest Ottawa drive-in concerts – livestreamed online with #CanadaPerforms, a federal program to support artists during the COVID pandemic – are being hosted at a venue that may raise eyebrows to anyone supporting the current protests against racism and monuments to a racist-colonial past.

The ‘Zibi’ development-in-construction is situated at a sacred site – the area at what is known in English as the Chaudière Falls, on the river between Ottawa and Gatineau, an area named Akikodjiwan or Asinabka in the Algonquin language Anishinabemowin.

This development of condominiums and commercial space has proceeded without the proper consent of the Algonquin Nation since being announced in 2013. This is in violation of principles included in rulings by the Supreme Court of Canada, and in the United Nations Declaration on the Rights of Indigenous Peoples (UNDRIP).

Previously, some local organizations and events have taken action to honour the complexity of this issue:

While different grassroots Algonquin, other Indigenous, and settler peoples took positions (and action) against the development earlier, it was in the second half of 2015 that the chiefs of the nine status Algonquin communities based in Quebec – representing the vast majority of the Algonquin Nation – backed formal resolutions against development of the sacred site (read the Assembly of First Nations resolution).

The resolutions asked all levels of government to protect the site by (A) stopping development, and (B) entering into discussions to return the area to Algonquin stewardship. They referred to the pre-existing Asinabka vision for the site that had been led by the late Algonquin Elder and leader William Commanda, that had widespread support before the developers put forward their plans.

However, governments at all levels ignored these requests, and development has proceeded.

Earlier in 2015, the developers did enter into a benefits agreement with one status Algonquin community, Pikwakanagan, and then with the associated “Algonquins of Ontario” (AOO) entity that consists of Pikwakanagan and nine non-status communities, that was formed in the 2000s to engage in the contested Eastern Ontario land claim process.

There is more complexity to the differing positions within the Algonquin Nation than the above description, but that is the 2-minute version that illustrates how:

Public awareness and understanding of this situation – of the sacred site, the associated Indigenous rights, the development project, and the differing positions of the Algonquin people – is less than adequate.

The developer-friendly media, the company’s own PR, and divide-and-conquer dynamics have served to quiet or confuse and misinform many, and keep the issue from the prominence it deserves.

The two centuries of dispossession of the Algonquin and other Indigenous Nations who used the site – a sacred heart of one of the primary pre-colonial transportation corridors of the continent, with the waterfalls comparable in stature to Niagara Falls before being dammed – by historical figures like Philemon Wright, JR Booth, EB Eddy, and others, has also contributed to a diminished significance in the eyes of many. Otherwise, the Akikodjiwan-Asinabka-Chaudière Falls situation might be recognized by many more people in and outside of the region.

The danger of events like Bluesfest at Zibi, is that they can legitimize to the general population the re-colonization of the site that is happening, by pushing the issue out of consciousness and providing non-qualified endorsement of the development. In this instance it is to a national audience, with the government partnership of the National Arts Centre with #CanadaPerforms.

Acknowledging the full situation is necessary, and it goes beyond land acknowledgements.

The late Wolf Lake Chief Harry St. Denis referred to the problem with land acknowledgements in the face of this situation, in a 2017 presentation to committee at Parliament. He also speaks to the need for all Algonquin to have a say at this site, and problems with the larger land claim. Video 2min20s

Then-Chief of Kitigan Zibi, Gilbert Whiteduck, also spoke of the difference between ceremonial inclusion and material inclusion, in 2014 when the city of Ottawa decided to rezone the islands for development after ignoring Kitigan Zibi’s request to postpone the city council vote in order to have dialogue first. He also discusses Elder William Commanda’s vision for the site and approach to differing views, and more on the history of the area. Audio 3min40s

In this era where historical monuments to racism and colonialism are being contested and overthrown, we need to ask what responsibility non-Algonquin and non-Indigenous people have in proximity and potential participation with this place — with such a large ($1billion+), private-property, metal-glass-and-concrete monument to present-day corporate colonialism and the violation of Indigenous rights?

For a comphrehensive backgrounder on the site and development, please see this 2019 post:
Sacred Waterfalls Site in Ottawa – Annotated Resource Guide
(It includes references and source links to most of the information in this piece)

The August long weekend – the first Monday in August is a civic holiday in most of Canada – was when Grandfather William Commanda hosted annual gatherings at his place on Bitobi Lake in Kitigan Zibi, that grew to bring thousands together each year as a Circle of All Nations. The first gathering there was in 1969 and the last in 2011, just after he passed away (on August 3rd of that year). It was at the gathering a dozen or so years ago, that the author of this piece first learned about the Asinabka vision for the sacred site, and then since 2014 has been involved with Algonquin and other peoples to protect the site from the development.

(1) The Zibi development is on the Gatineau shoreline as well as on the islands closest to Chaudière Falls. Slightly downstream Victoria Island has been public space, a site of ceremony and gatherings in recent decades, while the other islands were occupied exclusively by industry.

(3) Windmill Development Group Ltd. is an Ottawa-based environmentally-focused developer company that created the ‘Zibi’ development. It later brought in a much larger partner, Toronto-based Dream Unlimited Corp, and also created a new spin-off company, Theia Partners, for its own interests in Zibi.

(4) In 2015, researchers Randy Boswell and Jean-Luc Pilon published archaeological studies focused on “Hull Landing” near the Canadian Museum of History, the downstream beginnings of the portage route around the falls, goig back more than 4500 years that “paint a picture of Ottawa-Gatineau as a profoundly important place for aboriginal people” (quote from the Ottawa Citizen newspaper).

Land acknowledgements:
The CEO of the National Arts Centre, the two Bluesfest concert co-hosts, and Samantha Tenasco (of Zibi’s Memengweshii council) acknowledging the Algonquin and other Indigenous peoples in Canada.

Haviah Mighty:
The 2019 Polaris Prize winner, performing Saturday August 1st, responds to a question from the audience about what message she might have for other artists about ‘the current situation’.

Zaki Ibrahim
and
Amanda Rheaume:
Both of these artists, separately, had specific messages about the sacred site hosting the performances. As Ibrahim said, it’s important to come “to understand” these issues, what they mean.