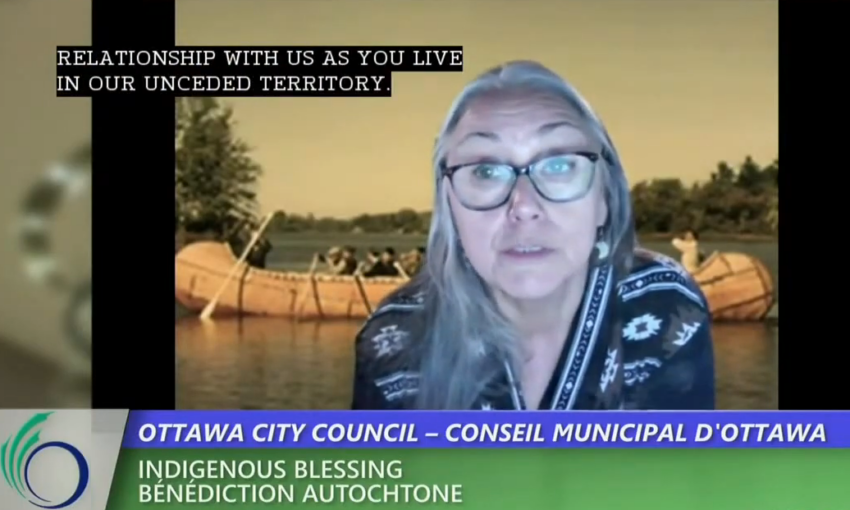 The “City of Ottawa – Anishinabe Algonquin Nation Civic Cultural Protocol and Implementation Plan” was officially approved on April 13, 2022 and is based on discussions that began over 11 years ago, in 2010.

This post is intended to provide an accessible understanding of the protocol and the context, for Anishinabe Algonquin Nation members as well as for the rest of us living here on Anishinabe Algonquin unceded and unsurrendered territory. It may also provide inspiration for people in other municipalities and Nations.

The article explains the protocol and highlights some of the protocol’s contents. It then looks at two aspects that aren’t explained in the protocol: the (new) name of the Nation; and, the lack of mention of the ‘Algonquins of Ontario’ in the protocol.

The ‘new’ name is to put Anishinabe before Algonquin, contrary to how it was previously almost always phrased as “Algonquin Anishinabe.”

And the protocol isn’t at all clear on the relationship between the City and the non-status ‘Algonquins of Ontario’ group – formed for the Eastern Ontario land claim – despite the City having collaborated with the AOO in many ways during the entire period of the protocol’s development.

Read the article at Anishinabek News.

Also –
A link to the full protocol documents is included in the article and I made a ‘shortlink’ for it as well (tinyurl.com/ottprot). The link has the official protocol/plan document and the two annexes, and each of those three documents are available in English and French versions.

The article is also available as a 2-page PDF version for printing.

This is especially useful for physical (offline) distribution, to bridge the ‘digital divide’ for people who aren’t internet-literate or who don’t have access, and simply for the pleasure and depth of reading and referencing it non-electronically.

The direct link to the video is youtu.be/_Q8KS5onPfQ, and it is embedded here below.

Two city staff gave a presentation explaining the protocol’s creation process and content, and that is between 14:00-27:30 in the video. The full timeline of featured speakers is listed under the video here, and in the written description on Youtube.

* There are also audio file versions of that 14min presentation, and of the full video.

** The shortlink tinyurl.com/eqed-algonquinhistory can be used to send anyone directly to this section of the post.

The protocol includes a section of “Historical References” that lists five ‘official’ selections.

The table I’ve put together below starts with those five, then has a second section with additional listings of items. There is then a separate, third section for particular focus on history of the Eastern Ontario land claim and non-status communities.

This is only a partial listing, based on what I am familiar with (and a few of which I was even involved in creating: see the note below the table). The criteria I’ve used here are that they are comprehensive works, that substantially address history, and that have at least some Anishinabe Algonquin backing as to their validity and worthwhile-ness (though that is not a guarantee that there are no errors or inaccuracies in any of the works: read/listen with discernment!). A more comprehensive collection would be better compiled with Anishinabe Algonquin leadership and direction (perhaps actions under the protocol involving the Ottawa Public Library will do this?).

That said, additional suggestions of relevant items to include here can be added as comments to this post (at bottom) and/or emailed to me (greg@equitableeducation.ca), as can feedback on what is already there.
And a note – as of June 18, I’m still working on improving the content and details in the table.

Use the scrolling bars and/or the expand arrows in blue, to view all the content details for each item.

*Personal Context – aka ‘social location’ statement of the author

The three items in the above table that I was involved in creating, are:

In 2008, I started organizing in solidarity with the Algonquins of Barriere Lake – Mitcikinabik Inik. This led later that year to co-founding a new formation of the grassroots group Indigenous Peoples Solidarity Movement Ottawa (IPSMO), through which we continued to support Barriere Lake as well as engage with a diverse array of Indigenous organizers and issues over the next decade. Based on this context, I was interviewed in 2013 by academic Craig Fortier as part of a larger project (later a book, “Unsettling the Commons”) – if you want, you can listen or read this “Decolonization and Indigenous Solidarity” interview (75-minute audio and written transcript). In it I also refer to Anishinabe Algonquin Elder William Commanda, who I met in 2008 and later helped host him speak at two events: the premiere of the “Invisible Nation” documentary film (where 500 people packed into the National Library & Archives auditorium to hear him do the opening, and then 100 had to leave due to fire regulations before the film itself was screened), and the inaugural Organizing For Justice conference (where he did both the opening and a separate session on the Asinabka Vision for the sacred site at Chaudière Falls). I became involved in the efforts to protect the sacred site when the later-to-be-named ‘Zibi’ development plan for the site was announced in late 2013, two years after Commanda’s passing; those efforts included me collaborating with Elder Albert Dumont (featured in the protocol video), Lynn Gehl and Chief Harry St. Denis (both featured in the table above). To learn more about the sacred site issue, you can see all my posts about the Chaudiere Falls, and specifically the comprehensive Sacred Waterfalls Site in Ottawa: Annotated Resource Guide I put together.

One ancestor in my family, my great(x3)-grandfather James S. Bangs, was an independent fur trader in the region in the mid-1800s. My dad (Don Macdougall) was doing genealogy and discovered records from Bangs’ correspondences, mostly via two ‘copybooks’ of letters he wrote between 1855-1862. You can read more about Bangs and the genealogy work in this two-page PDF of the 2006 story published in The Beaver (now known as Canada’s History) magazine.

My dad also found two 1863 letters from seven Anishinabe Algonquin Chiefs requesting Bangs’ support in advocating for them – based on (in their words) “our long acquaintance with you and having ever found you to manifest a lively interest in our welfare” – and one 1865 letter from Bangs to Robert Bell in Quebec, requesting support for their cause: “At the urgent Request of My Indian friends on the Madawaska [River] from among whom I have just Returned I beg leave again to call your attention to their petition to the Governor & Council for a grant of Land in the Township of Lawrence placed in your care Some two years Since. […]” My dad had reached out to Peter Di Gangi (featured in the table above) and through him, James Morrison (whose work is also featured in the table above) assisted my dad and sister (Heather Macdougall) in transcribing the specific Chiefs’ names. These were the seven Chiefs – with English pronunciations, as included in one of the letters, included in brackets: Pon chimakanich (Paul Choemoganiche), Bon akawac (Paul Kawwache), Simo Penesi (Simo Pinacie), chan kapeian (Charl Kabais), simo amikos (Simo Meconce), piien kapa (Pien Cabonechine), Banasawe mechaki (Fras Majockie). You can read more about the situation with these Chiefs and their circumstances with petitions and land in the ‘Township of Lawrence’ section (pages 106+) of “Dispossessing the Algonquins of South-Eastern Ontario… 1760-1930” (thesis) by Marijke E. Huitema.