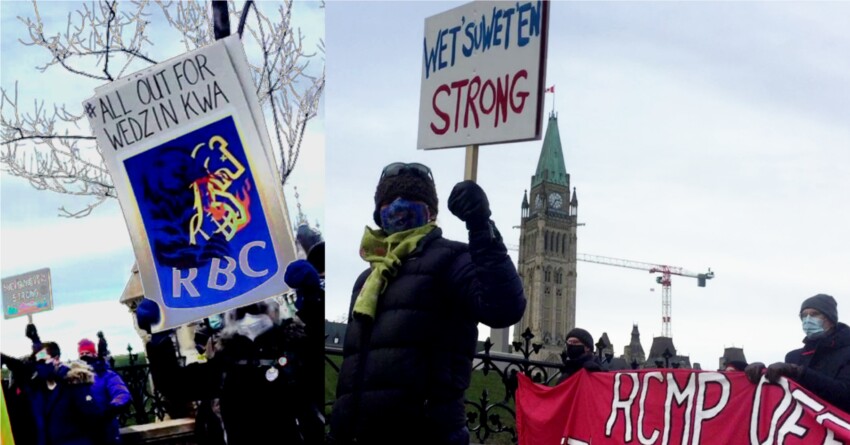 This article was originally published at National Observer on 29 November 2022.
There is also a 2-page PDF version (with added comic) to print for offline reading and DIY distribution.
An expanded version of this article (~2x as long) is planned for mid-December, and will be posted here at that point.

What is RBC doing as “exclusive presenting sponsor” of the annual Truth and Reconciliation Week?

But the problem was in starker view this year. On the first day of #TRweek, Wet’suwet’en Nation land defenders posted a call to “flood the phone lines” of RBC as construction of the Coastal GasLink (CGL) pipeline prepared to drill under Wedzin Kwa (colonial name: Morice River) on Wet’suwet’en territory. RBC finances CGL along with other fossil fuel projects violating Indigenous rights; in total, RBC financed US$38.8 billion of fossil fuels last year, fourth-highest of all financial institutions worldwide.

RBC’s conflict of interest is difficult to ignore. The sponsorship places the residential school survivors, other featured speakers and all involved in TR Week in a position or perception of implicitly condoning RBC’s actions.

For its part, the NCTR says its multiple sponsors made it possible to present TR Week and stream it to more than 500,000 students and 11,000 educators. It referred to the Truth and Reconciliation Commission’s Call to Action No. 92 for “the corporate sector to meaningfully engage in reconciliation.”

But I want to share some stories, from my media-making and Indigenous solidarity organizing, to provoke critical thinking. Because what the Wet’suwet’en are experiencing, what First Nations impacted by the tarsands are experiencing and what the world is experiencing with worsening climate catastrophes and environmental destruction are important.

He explained: “The real people who are going to raise those questions [around Canadian violation of Indigenous rights, etc.] are activists. Establishment organizations are not being taken seriously because they literally are taking too much [political] money from the government.”

The interview was part of an article introducing Indigenous Sovereignty Week, which consisted of education, culture and action events hosted semi-autonomously in multiple communities across Canada. It was based on a call from the Defenders of the Land network, and repeated in 2010 and 2011. It wasn’t streamed into any classrooms, but we did videotape a number of the events.

In 2013, I interviewed Truth and Reconciliation Commission chair Murray Sinclair.

He emphasized the commission’s recommendation to “teach children properly about who the Aboriginal people are, who they were, what they have contributed to the history of this country in a positive way, and how they have been victimized.” He also said: “The important thing that I do want people to understand is that [the impact of residential schools] is not an Aboriginal problem, this is not just for Aboriginal people to address.”

I understand these principles to apply to all aspects of the Canadian colonial system, past and present, of which residential schools were but one part.

In 2018, I interviewed the authors of Dying to Please You: Indigenous Suicide in Contemporary Canada.

Co-author Shaunessy McKay said: “What shut down the residential schools [was that] people started hearing about what was happening and demanding that this behaviour be stopped… If the suicide crisis were discussed openly in the same way, something would have to be actually done about it.”

Personal mental health supports aren’t what they propose because “oppression is what’s causing the suicide” — a colonial oppression obliterating traditional forms of life that needs addressing.

As a side note, senior co-author Roland Chrisjohn’s earlier book, The Circle Game, was originally prepared as the residential schools section for the Royal Commission on Aboriginal Peoples (RCAP) report. But he relays a story shared with him of how it was rejected because an RCAP commissioner promised her mother she wouldn’t allow criticism of the Catholic Church — illustrating the danger of conflict-of-interest affiliations.

In 2014, our group, the Indigenous Peoples Solidarity Movement Ottawa (IPSMO), screened RESIST: The Unist’ot’en’s Call to the Land, to build momentum for the national Peoples’ Social Forum. The film is a powerful education resource, but that doesn’t necessarily translate into curriculum inclusion.

The Unist’ot’en camp started small, standing directly in the path of multiple planned pipelines, and their continual presence on the yintah (land) over a decade — building connection, community and networks — was foundational to the massive Shut Down Canada uprising in 2020.

Since Shut Down Canada didn’t shut down CGL, RBC’s financing of the project has become a focal point of many solidarity actions across the country.

In 2019, I filmed Indigenous Climate Action’s executive director Eriel Tchekwie Deranger sharing her powerful story as a member of one of the directly impacted First Nations, encountering the expansion of tarsands devastation and how that motivates her work.

I think a multi-dimensional understanding — including the stories from those active in the struggle — is necessary to generate proper action on these issues. We need educational opportunities that generate more of that understanding. But will they be brought to us by colonial climate criminals like RBC?

UPDATE — After this piece was written, but prior to publication, the following occurred:

This is a short video I made from a November 2021 Wet’suwet’en solidarity march from Parliament Hill to RBC offices in Ottawa, with added anti-extractivism soundtrack.